Connection between generations: stories from our neighbours

Within the project “Lost childhood”, we, together with teachers and students, have decided to record new interviews with seniors, who were deported to Siberia after the war.  They are to recall themselves being children, to tell the moment of meeting strangers, to bring to mind how they were studying and spending a free time in special settlements after a long way to the East.

“The method of oral history helps students to look at this complicated traumatic history from the other perspective. It develops a sense of empathy”, — says the researcher of memory studies and coordinator of the project “Lost childhood” Hrystyna Rutar.

We were working, referring to the methodological recommendations, which were developed by our partners.

The aim of the methodological recommendations is to show new ways of working with children, which are based on personal stories of witnesses, in the field of history. The other aim is to show how to bring up the future generation of historians and chronographers, who are interested in historical questions.

Interview recording with participation of students and teachers: Stryi. The team, together with the members of history sections of “Youth academy of sciences” under the auspices of teacher Iryny Sukhoverskoi — Pavlyk Bogdan, Vasylyshyn Nadia and Koba Solomia — had an opportunity to see oral history in action. In Stryi the team of oral historical project recorded the interview of Igor and Iryna Maslyanko, who were deported as children to Siberia, and met each other and got married after their return.  Igor and Iryna told us about the moment when they first learned that both of them were deported: “— We were walking and talking, and for some reason we remembered the time I was in the orphanage, just briefly. — You know, the thing is that when you choose the one for the rest of your life, you want to know who the person is that. That is why we were asking different questions each other. — We did not attach importance to it. He says: “I was in Siberia”; “And I was in orphanage”. And that’s it. One question after another.

Within the project “Lost childhood” the team of oral history project, together with students of Secondary school No.50 Andriyovska Sofia and Yavorska Solomia recorded oral historical interview.  The narrator,Dzinera Lyubov was born on the  15th of May, 1961 in state farm of Sulukolsk, Semyozerniy district, Kostanayskiy region, Kazakh SSR.

In 1978, Ms. Lyubov moved from Kazakhstan to Lviv, and in 1982 she brought her mother there. In Lviv she worked at the shoe factory «Progress». She remembers that at first it was difficult for her, because there was nobody she knew there, and she said to herself: «Honey, hold on and that’s it. You’re home». 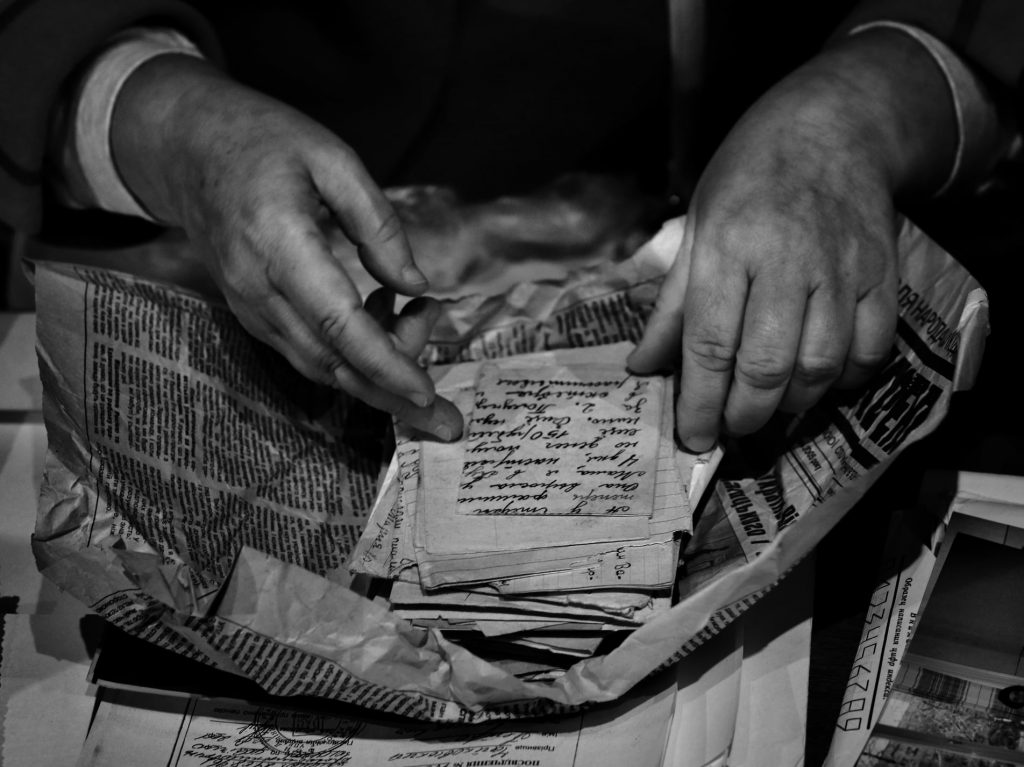 Students Avelina Andruschak and Khrystyna Shashkina from Skala-Podilska, under the guidance of their teacher Oksana Underko, recorded an interview on their own with a resident of Ivankiv village Maria Sytnyk. The narrator Maria Vasylivna Sytnyk (maiden name Hrynkiv) was born in 1938 in a family of partisans: both of her mother’s sisters and a brother were members of the armed underground movement in the village of Ivankiv. The girls were imprisoned for a long time, and her mother`s brother Petro Hrechuh (1925-1952) with a call sign «Bereza» (Birch) was one of the last underground fighters in the region. He was captured by the NKVD and was sentenced to death and shot in Proskurov. «What was my childhood like? It was rural, postwar. One of my first conscious memories is the famine of 1946-47. We weren`t very poor because we had a cow, and I was the only child at home, a single child, so I got the best pieces. Once I climbed the gate, and there was a crowded street, full of people, so I shouted to them: “Hey, I have some bread!” And there were four children in the neighborhood, they had nothing to eat, so they cooked corn for a long time and ate that».

Then they established a «kolhosp» (collective farm) in the village, and for this purpose the barn was completely dismantled, because it was made of high-quality materials and was coated with tiles, so everything was taken for the collective farm. «Banderivtsi» (partisans) were in the village as well: «Once those guys came to dinner, laid down their weapons, I was a little girl and I was in bed, I could hear everything. And one moment the guard ran inside: “Moscali!” (Muscovites)!” – “Where?” – “Here!” They put out the lamp, laid on the floor, prepared for battle. The Muscovites opened the gate, their raincoats rustled under the windows, passed through the courtyard and left…».

As a child, Mrs. Maria and her grandmother absconded in the village while her parents were imprisoned in Skala: «We stay somewhere during the day, and in the evening, we come back, take the keys from neighbors to our house, we feed all our domestic animals, stay overnight and sleep on the stove cuddling up to one another, and in the morning, we go out to people again. Later, the grandmother ransomed relatives by selling a foal, so they were released».

The Hrynkiv family was taken away on September 7, 1949. They were brought to Kopychynets transit prison. The family waited for 16 long weeks for deportation to Siberia: «People asked for being taken at least somewhere. In the middle of the chamber there was a barrel (for physiological human body needs), and a ladder next to it. From time to time the men from our chamber one by one took out this huge barrel when it was filled. People got sick of sewage. I got erysipelas and barely survived. We had a bathe only once. It was a big shame. I still remember the stress of washing all the children together with the women. Each wanted to cover themselves with at least some apron but they didn’t allow it».

For 6 years of expulsion (1949-1955) Mrs. Maria and her parents were in the Krasnoyarsk area in the Khakassia autonomous region. She came back to Ukraine alone, as her parents hadn`t yet had the right to return. Later she got married, and life began to improve. A short story based on the results of the recordings was written by Mrs. Oksana. 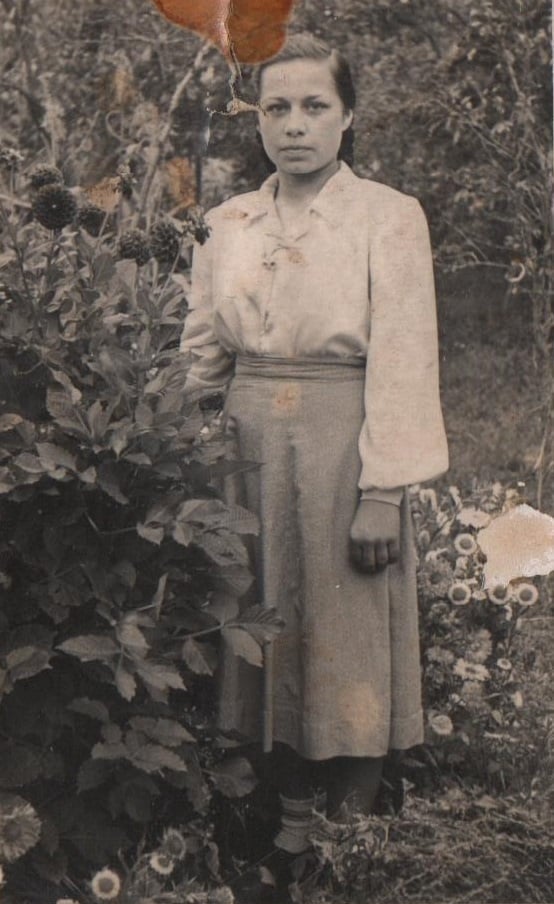 Involvement of teachers and students

«In general, the story is impressive and makes you think about the past events, and about the «lost childhood» of these people», – says Solomia Yavorska and shares some of her impressions after the recording of an oral history interview. Solomiya, together with Sviatoslav Maksymovych and Sofia Andriyovska, under the guidance of their teacher Ms. Olena Sabadash, had a meeting with Maria Maksymovych (maiden name Sosulovska) and documented her story.

They talked about her family, whose fate was inextricably connected with the struggle of the Ukrainian people for independence. The large Maksymovych family included Sich riflemen and UPA members. The students recorded interviews about the return of the Soviet government to Lviv region in 1944 and the deportation in 1947. 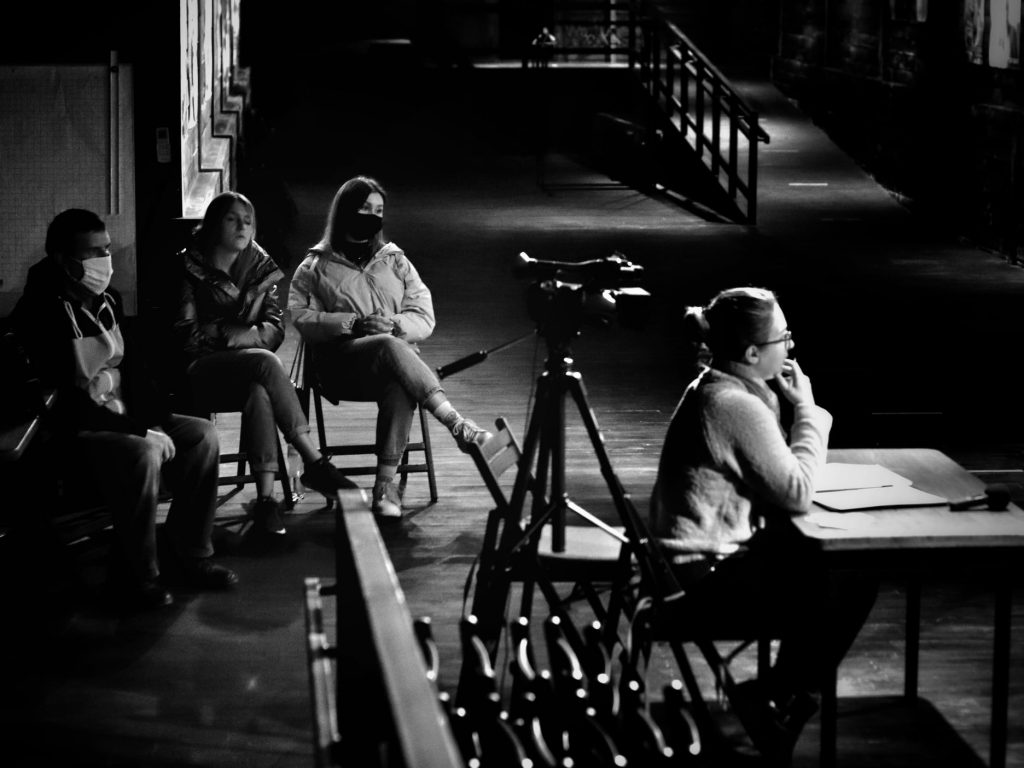